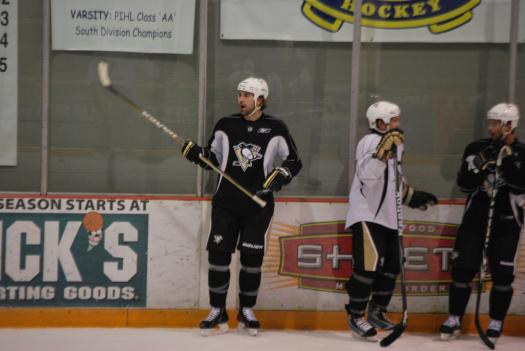 A number of Penguins players are getting an early jump on training camp as players are skating today at Southpointe going through informal workouts.
About 20 players are skating this morning includng newcomers Mike Comrie and Aaron Asham. The players have been skating from 10-1 for the last two days.
Defensemen Paul Martin and Zbynek Michalek, the Penguins two prized free agent signings from this summer are also skating with the team this week.
Meanwhile forward Jordan Staal….
is at the facility getting treatment I’m told. Staal is not skating but has been hopeful to skate at somepoint after the first week or two of training camp. It is not clear how well Staal’s foot is responding to treatment.
Defenseman Brooks Orpik who is coming off hernia surgery is skating and looks fine. He appears ready to go for camp. Orpik played injured for the final 4-to-6 weeks of last season.