Pens Sidney Crosby visits with concussion specialist, will sit out next two games 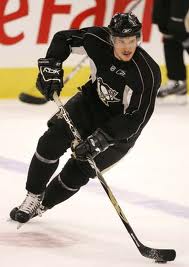 Penguins captain Sidney Crosby participated fully in today’s practice but Crosby will be held out of the lineup for the next two games, the team announced this afternoon.
Crosby, according to GM Ray Shero, saw concussion specialist Dr. Micky Collins of UPMC today and took an Impact test.
“Sidney took a hard hit during our game against Boston Monday night and wasn’t feeling 100 percent,” Penguins General Manager Ray Shero said in a team release. “He saw Dr. Micky Collins of UPMC today and took an ImPACT test, which showed no problems. However, we all think it’s best that he sits out the next two games as a precaution.”
According to the team, Crosby is being held out of the game as a precaution. Crosby though is not being held out because of his collision with Chris Kunitz that resulted in a sore knee, which Crosby was favoring on Monday night and believed to be sitting out yesterday’s practice for. Crosby would have never went to see Dr. Collins or took an Impact test if that (knee) was the reason.
The Penguins right now only have 11 forwards with Richard Park still off the ice due to a lower body injury and Dustin Jeffrey several weeks away from being ready for game action.
Steve MacIntyre is on Injured reserve but has been practicing.