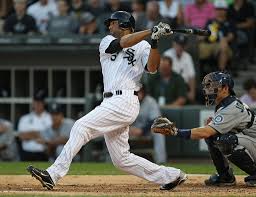 Pirates GM Neal Huntington has the okay to add a big salary and leading into the July 31st trade deadline, Huntington has his sights set on Chicago White Sox right fielder Alex Rios. Rios, 32, is hitting .270 with 11 home runs, 40 RBIs and has 19 stolen bases.
Team sources say Huntington has held Rios in high regard for years now and tried trading for Rios when he was a member of the Toronto Blue Jays.
Rios has a huge contract, making $12.5 million this season. He is scheduled to make $12.5 million in 2014, and has a $13.5 million club option with a $1 million buyout in 2015.
The terms of Rios contract is that if he is traded between the beginning of 2011 season and spring training in 2014, his future salaries increase by $500,000 each.
The Pirates hope to add an impact bat at the right field position, which would also lead to the team improving the bench by making Jose Tabata more of a bench player.
Rios is certainly intriguing and upgrades the position as he’s a player who can get you 25 home runs, 90 RBIs and 20-25 stolen bases. Last season Rios hit .304 with 25 home runs – 91 RBIs and had 23 stolen bases.
Alen Hanson could be dangled for Rios. The Pirates are said to regard Jameson Taillon and Gregory Polanco as untouchables.
PIRATES NOT SOLD ON JORDY MERCER?
Jon Heyman of CBS Sports believes the Pirates pursuit of Alex Rios could also lead to the Pirates making a play for White Sox shortstop Alexei Ramirez.
Ramirez, 31, is hitting .286/.311/.358 with 1 home run and 21 RBIs. Ramirez has 20 stolen bases and excellent range from short. Like Rios he carries a big contract, making $7 million this season, $9.5 million in 2014 and $10 million in 2015. He’s also due a $10 million option with a $1 million buyout in 2016. That’s a big contract to take on for a player of Ramirez caliber. People want Pirates to spend money but they still need to be smart about it.
It’s hard to imagine them taking on the bulk of Rios and Ramirez’s contracts.