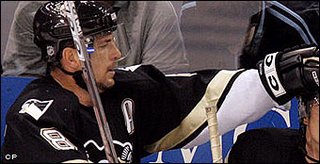 The Pittsburgh Penguins have signed Mark Recchi to a 1 year 2.28 million deal. The 38 year old forward recorded 57 points in 63 games with the Pens before getting sent to the Hurricanes where he recorded 7 pts in 20 games. It took Recchi some time adjusting to Carolina’s up tempo style compared to the Penguins laid back do what you want style. During Carolina’s Stanley Cup run Recchi was a key contributor netting 7 goals and 9 assists while playing wing on the top line.

Depaoli’s take: The addition of Mark Recchi comes as now surprise since the writing has been on the wall since day 1 of free agency. Recchi can still produce 25-30 goals a season and is a solid player on the ice but off ice issues with the younger players including Crosby is something that must be resolved. Crosby and Recchi had their run in’s last season but both have said everything is fine now. It’s a new season and everyone starts with a clean slate but now this is Sidney Crosby’s team not Mario Lemieux’s team anymore.

Check out DePaoli’s take on the recent signings from the Penguins…..

RW Ronald Petrovicky – played for Atlanta this past season recording a 8 goals and 12 assits. A solid role player who contributed 62 penalty minutes in 60 games during the 2005-06 season and ranked second on the team with 109 hits. In the 03-04 season Petrovicky recorded a career high 16 goals and was seventh on the team in pts.

Resigned Defenseman Brooks Orpik for two years – Orpik 25, is the Penguins only hard hitting defenseman who puts fear in the other team. At the beginning of the season Orpik had a tough time adjusting to the new NHL but by mid season he was the teams best defenseman finishing the season with a -3 which isn’t bad on a last place team.

Colby Armstrong accepts qualifying offer – Colby 23, appeared in 47 games last season posting 16 goals and 24 assists. Armstrong seems most suited as a energy third line player but because of his connection with Crosby he most likely will have every chance to regain his spot on the top line.

Pens send second round pick from the Carolina Hurricanes and pick up forward Niklas Ekman and goaltender prospect Ehelechner. Ekman 30, recorded 20 goals – 31 assists and a plus 50 for the San Jose Sharks the past two seasons. Ekman played on Joe Thorntons line for most of the year but fell out of favor with the team during their playoff run and was benched due to consistency problems. Ekman will get his 20 goals this season and play solid defense in the defensive zone. He’s a good all around player with great speed and good hands but will drive fans crazy because he has the talent of a 40 goal scorer but only produces 20 goals a year. Overall solid pick up by Ray Shero.

Penguins acquired C Dominic Moore and F Libor Pivko from Nashville in exchange for a third round draft choice in the 2007 NHL Entry Draft. Moore 25, Moore appeared in all 82 games for the Rangers. The 6-foot, 195-pounder had 9 goals and 9 assists for 18 points. He had 28 penalty minutes, won 46.3 percent of his faceoffs and was a plus-5. He ranked 16th in the NHL among rookies with 139 shots.He established himself as a strong penalty-killer. He was second among Rangers players with 293 minutes, 28 seconds of short-handed time and third with 3:34 in short-handed time per game. The addition of Moore along with defenseman Mark Eaton have drastically improved the teams penalty kill unit. The other player in the trade Libor Pivko 6ft3 214 is a career minor leaguer but Ray Shero has said he will fight for a spot on the team. The guy has good size but he just sounds like another Lassie Piereta to me.

Overall Ray Shero has done a fine job upgrading this team. The additions of Eaton, Moore shore up the teams penalty kill problems while the additions of Jarkko Ruutu and Ronald Petrovicky add energy and grit to the third and fourth lines. Shero is most likely done putting this team together although there are a few rumors out there the Pens still have interest in winger Petr Skyora who recorded 18 goals in the russian league a few years ago on Malkin’s line. Shero is the building this team the smart way. Surround quality role players around his star Sidney Crosby and add a missing piece here and there like he has with the signing of Recchi and the trade for Niklas Ekman. If the Pens get Malkin over this team will be in the thick of things for the final playoff spot come April. You heard it here first. Mark it down!!!