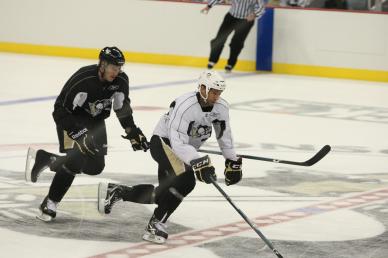 Source: Dupuis has strong interest in working out deal
Winger Max Talbot is considered one of the Penguins wildcards in their group of pending free agents, and while it’s still early in the process, the Penguins have yet to formulate a plan on whether they intend to discuss a contract extension with Talbot this season.
Multiple sources close to the situation on both sides tell Inside Pittsburgh Sports that there hasn’t been “any” discussions between Pens Brass and Max Talbot’s camp regarding a potential new deal.
At this point, no talks are planned and the Penguins have yet to inform Talbot’s reps that they have an interest in discussing a new contract before the upcoming trade deadline which is the time frame GM Ray Shero usually implements as a deadline, although the Penguins went into March last year with extensions.
The Penguins kicked off contract talks a few weeks pending free agents when they finalized a three year deal with defenseman Deryk Engelland last week and have begun preliminary talks with centerman Mark Letestu.
Talbot, 26, is set to become a free agent at seasons end and in talking to executives around the league, his value appears to be all over the place.
Some believe the Penguins Stanley Cup hero could command a deal in the $2 million range on the open market.
Talbot’s leadership qualities are valued highly by the Penguins and has a strong interest in staying in Pittsburgh where he’s become a fan favorite, but Talbot is also said to be intrigued about the possibility to test free agency for the first time in his career.
Right now though there’s no rush from either side to engage in talks.
The Penguins have $51.7 million committed to 14 players for next season and only 5 forwards under contract for next season.
Pascal Dupuis and Mike Rupp are two pending free agents who have expressed a strong interest in working out an extension with Penguins through their agent Allan Walsh, sources say.