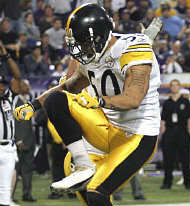 The Pittsburgh Steelers are not offering former inside linebacker Larry Foote a starting job but the Steelers are courting Foote with a multi-year offer that includes an opportunity to be the eventual replacement for close friend James Farrior.
The Steelers have remained in contact with Foote’s agent throughout the past week and according to reports, Foote is scheduled to visit the Steelers on Monday.
Foote visited the Washington Redskins and Arizona Cardinals this week but has yet to strike a deal with either team. Unlike Pittsburgh, both teams are offering a starting job.
Returning to Pittsburgh would be an odd move for Foote who is reportedly seeking a deal that tops the one Scott Fujita signed with Cleveland, which is worth $14 million over three years. Foote told a Detroit newspaper in February that he views himself as a starter in this league.
Some see a visit to Pittsburgh being scheduled as leverage and an opportunity to put the heat on Arizona or Washington to increase their offer.
Foote whose first choice is not to sign with Pittsburgh, told the Arizona media on Wednesday that the Arizona Cardinals are his first choice.
“I want to be a Cardinal, so hopefully we’ll get it done.”
The heat is now on the Redskins and Cardinals as Foote is expected to pick a team in the next 3-5 days, according to source to Foote.
The New Orleans Saints are also in the market for a starting inside linebacker but it is not clear if Saints are interested in Foote.