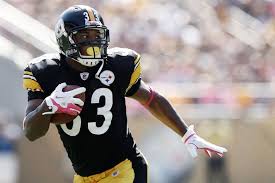 Isaac Redman has gone from the Steelers anointed starting running back to on the street. The Steelers today released Redman and signed linebacker Kion Wilson from the practice squad.
Redman, an undrafted free agent out of Bowie State, made the team in 2010 and rushed for 1,148 yards and 5 touchdowns on 282 carries as a Steeler. A fixture as the Steelers No. 2 back the past couple seasons, Redman’s best season came in 2011 as Rashard Medenhall’s backup, rushing for a career high 479 yards.
With Le’Veon Bell sidelined to start the season, Redman entered this season as the starting running back but he faltered from the start and the coaching staff eventually had enough and benched him for the last three games.
Redman had 12 yards on 10 carries and never seemed to recover from his fumble against Tennessee. He also burned some bridges by saying he suffered a concussion vs the Bengals when the Steelers said he didn’t.
A factor in Redman being phased out wasn’t just his play. It was Jonathan Dwyer being motivated to contribute in any way and Dwyer has been excellent in pass blocking since the Bears game and the coaching staff has been thrilled with his effort.