Pre-game Skate Updates
12:20 p.m. – Pre-game Links: Is Eric Tangradi’s stay short-term?; Plus Bylsma talks about his D-pairs and the recall of goaltender Patrick Killeen.
12:05 p.m. – Flyers Defenseman Chris Pronger will not play tonight. He appears very close to playing but is looking to get his knee stronger.
11:30 a.m. – Defenseman Kris Letang is a game time decision due to illness.

Kunitz – Crosby – Dupuis
Cooke – Letestu – Kennedy
Tangradi – Comrie – Malkin
Rupp – Talbot – Adams/Godard
Out: Arron Asham (shoulder)
D-Pairs
Orpik – Michalek
Martin – Lovejoy
Goligoski – Engelland
*Kris Letang is not participating in the morning skate
Notes: All four players on the 4th line are rotating. The group opened up with Rupp – Talbot – Adams but then Godard began working his way in replacing Adams and Rupp on the wings. Adams and Talbot also rotated at center.
I’ll see what I can find out after the morning skate but I don’t expect Dan Bylsma to tip his hand on who sits tonight upfront.
With Kris Letang not participating in the morning skate, Ben Lovejoy was paired with Paul Martin.

10:28 a.m. – Defenseman Kris Letang is not participating in the morning skate
10:23 a.m. – Brent Johnson and Marc Andre Fleury are both on the ice
10:15 a.m. – Arron Asham is in street clothes, will not participate in morning skate. Injury though is not believed to be serious.
10:00 a.m. – Arron Asham is out, per a team source
9:52 a.m. – Head coach Dan Bylsma and other members of the Penguins hockey operations staff gave out donuts and coffee to people in the student rush line. Some students have been out there all night. Pens are great when it comes to fan relations 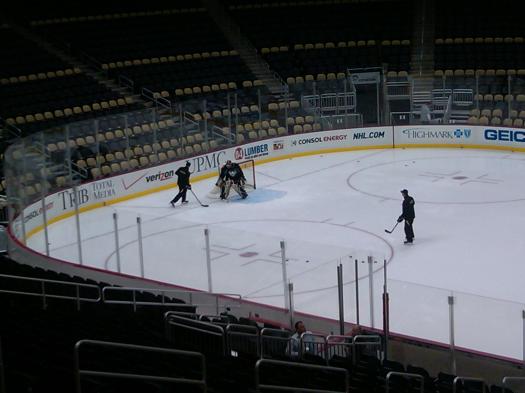 9:45 a.m. – Coaches Tony Granato and Gilles Meloche are on the ice about 45 minutes before today’s morning skate working with goaltender Patrick Killeen who was recalled last night.
There has been no word on an injury to Marc Andre Fleury or Brent Johnson. Fleury has been seen around the facility.
9:30 a.m. – As expected, the Pittsburgh Penguins this morning recalled winger Eric Tangradi from Wheeling of the ECHL. Tangradi will participate in the Penguins morning skate which begins at 10:30 a.m.
The Penguins hit the ice for their morning skate at 10:30 a.m.