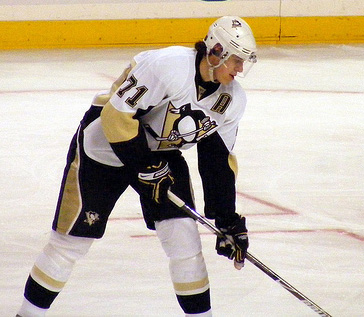 Penguins forward Petr Sykora did not speak to the media today following Penguins practice.
As expected Sykora was a scratch for Game 6 and was scratched for the final two games of the series.
Sources tell me Sykora has been told by the Penguins coaching staff that he has to improve his practice habits to get back into the lineup.
Sykora has skated very hard in the Penguins past two practices ( Friday & Monday)
An encouraging sign for the Penguins heading into the second round is Ruslan Fedotenko played his best game of the playoffs in game 6.
Fedotenko was the first Penguins top 6 winger to score an even strength goal in the series.
Fedotenko was playing well in other areas of his game but the Penguins will need him to contribute offensively the rest of the way like he did in game 6.
The Penguins will have to get more offensive contribution from Chris Kunitz at even strength. He has one goal in his last 27 playoff games.
Interim head coach Dan Bylsma is not shy about getting
Philippe Boucher in the lineup and that concerns me because defenseman Kris Letang has confidence issues at times.
Bylsma was not happy with Letang‚Äôs play in the series and made Letang a healthy scratch in game 5.
Letang took all of the reps in practice today with Mark Eaton but he may be looking over his shoulder during the next series. A bad game may put him on the bench.
Bill Guerin and other veteran players talked about how Max Talbot changed the momentum of the game following his fight with Daniel Carcillo.
What also sparked the Penguins was the scrum following the Penguins first goal. The team was fired up after Coburn took a swing at Ruslan Fedotenko.
When the Penguins tied the game at 3-3, the Flyers were so stunned and you could just read the body language that the game was over in the Penguins favor.
Being a veteran team, you would think the Flyers would have shown the ability to regroup.
Miroslav Satan skated with the Penguins second power play in practice today. I’m hearing he has the inside track on stayin in the lineup for game 1.
Right now though, I’m told putting much stock into the Penguins lines in practice today.
According to Slovak newspaper
The Philadelphia Flyers sixth-round pick in 2004, Ladislav Scurko, has been charged with murder after being accused of stabbing referee Marek Liptag 14 times back in January 2008 over a monetary dispute.