1. The Washington Capitals were ousted in Round 1 Wednesday night on a Brock McGinn double overtime goal as an unpredictable 2019 postseason continued.  The NHL has always wanted parity with this playoff alignment and they got it this season with all no division winners advancing past Round 1.

Washington’s rein comes to an end and as good as a story the Hurricanes are, the NHL loses a great Round 2 storyline of Trotz vs the Capitals.

This was just a strange series for the Capitals.

To go up 2-0 in the series followed by laying an egg in Games 3 and 4, to then deliver what looked like a knockout punch in Game 5 where it appeared after fives games they were finally taking the Hurricanes seriously, only to drop games 6 and 7 as Carolina roared back to win four of the final five games.

When the Capitals would bring their A-Game, Carolina couldn’t play with them.

Problem Washington ran into, their A-Game only popped up in very short stretches this series. They looked like a club not interested in playing a sixty minute game. The Capitals were a hockey club that just went into too many lull stages which opened the door for Carolina to hang around and it eventually backfired on the defending champs. It just felt with Washington that at times they were going through the motions and they would eventually make one more play than the Canes.

The Capitals struggled all series in holding onto leads and some of this was goaltending and strategic game planning to sit back, especially in Game 7.

Braden Holtby was great in overtime, but the goof he had on the Aho shorthanded goal changed Game 7 as the Capitals were in complete control and his poor angle on the Jordan Staal goal was as bad as it can get as Staal caught him leaning.

Staal in games 6 and 7 brought back memories of Pittsburgh Penguin Jordan Staal, which was great to see for him personally. Staal was a dominant force below the dots late in the series that help counter the Capitals 1-2 punch down the middle.

Carolina is at their best when the puck is in their the hands of their d-men as they have great group of puck-movers. With Washington sitting back, playing a conservative dump-and-chase game as they ran out of gas from the third period on, it fueled the Hurricanes strength’s of being able to clear the zone quickly and excel in a possession game the other way.

. It’s a quicker, better puck moving and smarter group of defensemen than the group in Pittsburgh that got so exploited in Round 1.

Jacob Slavin is that legitimate No. 1 two-way defenseman that can carry you in a post-season and he’s getting an opportunity on this stage to show he’s a top-10 defenseman in all of hockey, something the Penguins also didn’t have in their lineup.

The health of Micheal Ferland, Andrei Svechnikov will be key factors in the series for Carolina.

Round 2 officially gets underway tonight with Blue Jackets – Bruins. I like the Blue Jackets to advance in a long series, but coaches, evaluators just love the Bruins in this series and to get out of the East. Stars – Blues should be a really good tight series that has seven games written all over it. There is little separation between the remaining eight teams.

3. Penguins Co-Owner Ron Burkle has been heavily involved in the off-season discussions between GM Jim Rutherford and Team President David Morehouse. Sources say Burkle hasn’t been this involved in the off-season planning since the 2013-2014 season ended where the organization obviously made major changes with their front office and coaching staff. When big changes are being mulled, Burkle will get involved as he is now and one source alluded to Burkle being one of the prominent members in the organization who wants To read this insider news, subscribe to get “Inside Access”! 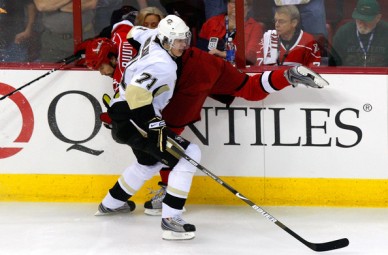 An Eastern Conference Executive on Penguins GM Jim Rutherford: To read this insider news, subscribe to get “Inside Access”! Sources tell TIOPS, Ownership has been alarmed enough by information that’s been provided them of what transpired this season with Malkin that rival executives are already under the [hide] assumption Rutherford has permission from ownership to at least go out and field offers for Malkin and the club will go from there on where to take things.

You can make an argument Roethlisberger’s game has shown signs of declining a tad in 18, but this was always just a no-brainer for the Steelers.

Where things go with Mason Rudolph will be interesting.

Remember him, The No. 3 QB on the depth chart in 18 who the Steelers claimed they had a first-round grade on that prompted them to trade up and take him in the third round of 2018 draft. GM Kevin Colbert last April even admitted the team considered selecting Rudolph with the 60th overall pick in round 2, which looks even more crazy.

“He was with the group of the top quarterbacks,” Colbert said of Rudolph. “That was a really good position. That’s very unique to the draft. It usually doesn’t come through with a nice group like that. We haven’t had that much depth at the top of the draft at quarterback in a long time. Mason was certainly a part of that group in our opinion.”

If Rudolph can’t beat out Josh Dobbs this season as the #2, it already becomes a bad pick less than two years in as you just can’t waste a third round pick on someone who doesn’t see the field when you only have so many years left in the Roethlisberger era.

6. The 2019 draft class is a class where there’s regarded to be little separation between prospects 15-40. If the Steelers want a true impact player, they have to get into the top-10 and it’s a good sign they’ve showed signs of trying to make that type of move for top target Devin Bush.

For the all fuss of grabbing one of the two inside backers, Outside linebacker isn’t getting talked about enough at #20 for the Steelers as it should be. Florida State’s Brian Burns and Clemson’s Clelin Ferrell deserve strong consideration.

If the Steelers sit at 20, they’ll have their choice of a number of cornerbacks to select with a run on them not expected until pick 20, Temple’s Rock Ya-Sin a popular name this week linked to the Steelers, Byron Murphy, Greedy Williams likely also on board at 20.

Safety is also an option with the likes of Darnell Savage, Nasir Adderley, and Juan Thornhill in play.

#20 could also be a prime trade down candidate if a team looking to nab one of the first-round QB’s is still lurking. The Steelers value the 5th year option with first round picks so hard to see them being inclined of moving out of Round 1.

One of the intriguing scenarios will be whether tight end Noah Fant is on the board at #20. Getting Ben Roethlisberger a new toy should never be ruled out. A tight end combo of Vance McDonald and Fant would be something to watch.[/hide]

Coyle with 2 goals. Pens should have picked him up.

you don’t need him when you have dominic simon

Pretty sure I beat that dead horse pushing for Bjugstad for Coyle trade.

I know. I was giving you props.

If it was a 1 for one deal sure, we can make the case that the McCann deal would have still been there but that is not an assurance. McCann, as it turns out, was the key piece

the pens should move malkin for nothing in return. his cap hit relief will be compensation enough. get rid of that fat cat.

Makes sense. Why take multiple high picks and top prospects when you can have nothing?

lolololol! multiple picks and top prospects for a 10 million dollar guy who scored a measley 21 goals and a -25????? the pens won’t be able to give that bum away.

I don’t disagree with trading him, but a ppg center is hard to come by. 9.5 also isn’t bad considering he’s a center and produces the way he does. If he doesn’t get that, trade Letang and get a young, top 6 winger with a lot of upside and a pick to put with him or Sid.