Week 1: Steelers – Browns What We Learned 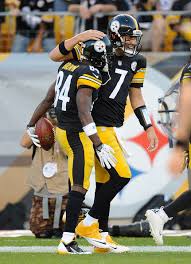 PITTSBURGH 30 – BROWNS 27
WHAT WE LEARNED
The Cleveland Browns nearly put together what would been one the best comebacks in Browns history, but the Pittsburgh Steelers made just enough plays in a 30-27 win over the Browns on Sunday afternoon.
A last second Shaun Suisham 41 yard field goal won it for the Steelers to take the season opener and start out 1-0 for the first time since 2010. Pittsburgh held a 27-3 lead at the half but the Browns roared back with 24 unanswered points in the second half before Ben Roethlisberger led the offense on a 5 play, 33 yard drive that setup Suisham’s game winner in the closing seconds.
Receptions of 11 and 20 yards by Markus Wheaton set up the game winning field goal.
“We can’t apologize for the way we win,” QB Ben Roethlisberger said afterwards. “We just have to win games.”
For the Steelers, the offense showed in the first half how dangerous it can be this season. Pittsburgh could do what they wanted from a short, deep passing game to running the ball with Le’Veon Bell.
They gave the Browns multiple looks and got the ball into their playmakers hands, namely Le’Veon Bell and Antonio Brown.
Bell rushed for 109 yards, including a 38 yard touchdown run and added 6 catches for 88 yards in the victory. Brown picked up right where he left off last season playing at an all-pro level. He hauled in 5 catches for 116 yards and added 46 punt return yards on 3 returns.
Bell and Brown have the potential to be one of the NFL’s most dynamic combinations at running back and wide receiver because of their play-making ability after the catch and contact. Today was a breakout game for Bell in what could be a sign of things to come if the Steelers can utilize his ability in the passing game, like they were able to do in the first half.
“I thought this was a game that everyone got to see what he can do,” Roethlisberger said of Bell.
Steelers head coach Mike Tomlin said he’s not surprised by Bell’s ability to perform in all situations. “He’s a guy for all situations,” Tomlin said. “We’re not surprised by anything that he does. He’s a quality, young player and we expect that type of performance from him.”
On a day where Ben Roethlisberger threw for 365 yards, Bell had 197 yards from scrimmage, Antonio Brown put up 162 All-Purpose yards and Markus Wheaton hauled in 6 catches for 97 yards, the scary part for the Steelers is it was still barely enough to win against likely one of the bottom-5 NFL teams this season.
Despite putting up 30 points and 490 yards, the Steelers offense struggled in the second half when the Browns were able to make adjustments and Cleveland won the line of scrimmage battle in a big way in the second half. Marcus Gilbert struggled with bull rushes from the edge.
The lack of a killer instinct from the offense was evident in the second half as with the defense in free fall, the Steelers couldn’t put that drive together to bury the Browns and halt their momentum before Roethlisberger and the offense went 5 plays, 33 yards to setup Suisham’s game winning field goal in the closing seconds.
A key is going to be the offense developing a killer instinct to put teams away because Pittsburgh’s defensive unit continues to show no signs that they are going to be able to stop teams.
In what was a growing theme last season and in the preseason, the Steelers defense is prone to giving up explosive plays. Pittsburgh gave up 53 plays of 20+ yards last season. Today they gave up six plays of 20+ yards and that was with Brian Hoyer at QB and Terrance West at running back, who gashed the Steelers for 100 yards on 16 carries, averaging 6.3 yards per carry.
The gap control of the Steelers front-seven continues to be a major issue, and plain and simple, the Steelers just can’t stop the run. It really doesn’t matter whose running the ball.
The Browns use of mis-direction and play-action caused the Steelers fits.
“I thought the significant element was the play-action,” Tomlin said of the Browns success in the second half. “They were getting chunks and flipping the field. We were working on the long field and they were working on the short field. They found rhythm with the running game, but it was the chunks and the misdirection game that was creating real issues for us.”
The issues are a combination of personnel, system and coaching staff. This group isn’t built to play a 3-4 when it comes to stopping the run.