Kesler Latest: LeBrun believes Pittsburgh, Anaheim, Detroit are among a group of teams Kesler would go to 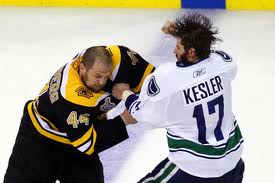 CLOCK TICKING ON CANUCKS TO DEAL KESLER
Ryan Kesler is going to be traded. It’s just a question of whether it happens before Wednesday’s 3:00 p.m. deadline or not until the summer.
The Pittsburgh Penguins and Vancouver Canucks continue to have dialogue but the word as of Tuesday night was that talks had yet to advance to any stage where the Canucks were ready to move on any proposal from the Penguins. Brandon Sutter and Simon Despres were both in the lineup for the Penguins in a 3-1 win over Nashville and Kesler was also in the lineup tonight for Vancouver. It’s believed a packaged centered around Brandon Sutter doesn’t excite the Canucks enough to move on a deal just yet. The clock, though, is obviously ticking.
One interesting twist to the Kesler situation has been the emergence of the Anaheim Ducks. As noted earlier, it’s believed the Canucks are willing to trade Kesler in the Western Conference and even in the division. ESPN’s Pierre LeBrun believes Anaheim is a team Kesler would be willing to go to.
LeBrun writes: “There’s a sizeable list of teams that have kept tabs on Kesler, including the Anaheim Ducks, who have a number of young assets that might interest the Canucks. Of course, you wonder would the Canucks really trade Kesler within the same division? The answer we got from one source with knowledge of the situation is that the Canucks don’t care what team it is, they’ll take the best package if it fits their needs. Kesler of course controls much of his fate via his no-trade clause and there’s a select group of teams he’d rather go to. I believe both Pittsburgh and Anaheim are among those teams, as well as Detroit.”
While information is truly murky on what teams are legitimate suitors and places Kesler would go, you can rule out the New York Rangers. Larry Brooks of the New York Post first reported today that the Canucks informed the Rangers that Kesler won’t waive his NTC to New York.