Penguins have pulled back on thought of extending Brandon Sutter during the season, mulling serious run at Ryan Kesler 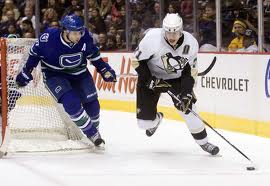 LATEST ON RYAN KESLER
Ryan Kesler, Vancouver Canucks
Cap hit: $5 million | Signed Through: 2015-2016
2013-2014 Stats: 60 GP – 20 Goals – 18 Assists – 38 Points – -10
Ryan Kesler hitting the trade block is a potential game changer throughout the league. While he’s been plagued by injuries and looked at as no longer being the 40+ goal scorer he use to be, a two-way center of Kesler’s ability has GM’s drooling over the prospects of acquiring him, despite the injury concerns.
The market is significant, though, some believe the Canucks best return for Kesler could be the summer not now. However, there is momentum pointing towards the likelihood of Kesler getting moved by March 5th.
The secret just got out this week but teams were informed by Vancouver in late January that they were willing to listen on just about anybody on the roster except the Sedin’s. As expected, Kesler is the player drawing the most interest.
Despite denials, Kesler made it known to Canucks management prior to the season that he would like a change of scenery, though, it is believed he never made an outright trade demand. Kesler a family man with young kids, NHL sources believe Kesler prefers to play in the Eastern Conference with less travel and closer to some of his family in Michigan.
What are the Canucks looking for? A three for one package. A first round pick, top prospect and young NHL center (being the key).
“What they’re going to be looking for is to pick up a young centre between the ages of 20-25 who can grow into the role that Kesler is in right now,” TSN’s Bob McKenzie said on Wednesday.
“Somebody that gives you a fighting chance at a reload if not necessarily a rebuild.”
Nick Kyperos of Sportsnet names the Red Wings, Penguins and Rangers among the teams showing interest Thursday night. There are certainly many others showing interest.
The Penguins are indeed very intrigued about Kesler and have spoken to the Canucks but what’s not clear yet at this point is whether the Canucks see the Penguins as a trade match and what I mean by that is whether they see Brandon Sutter as that type of young center that McKenzie and many others are talking about.
The Canucks had a scout in attendance for the Penguins 6-5 shootout loss to the Montreal Canadiens Thursday night, only fueling speculation that the Canucks were there looking at Sutter. Sutter flashed with a shorthanded breakaway goal, picking PK Subban’s pocket in the neutral zone.
Sutter has been looked at by some in the organization as the Penguins long-term third line center. That’s still believed to be the case by some (not all) but this could be a special situation in regards to pursuing Kesler where the Penguins could return to a dominant three-way center model.
One concern with Sutter is his rising salary. He has just a $2.066 million cap hit but Sutter has a very good agent in Donnie Meehan who setup his current deal with him making $2.7 million this season. Therefore, Sutter will be due a $2.7 million qualifying offer in June and is just a year away from unrestricted free agency.
The Penguins had exploratory talks (very preliminary) in December with Sutter’s reps at Newport Sports but the team for now has pulled back on the thought of extending Sutter during the season, multiple sources told Inside Pittsburgh Sports this afternoon. Barring a trade, substantive talks on a new deal are not expected to happen until the summer. The sense is Sutter’s camp will shoot for at least $4 million per season. I don’t expect the Penguins and Sutter to be on the same page there.
That is one reason the Penguins have given thought to be willing to dangle Sutter as trade bait in the right deal.
Rob Rossi of the Trib reports via twitter that the Penguins pitched a package of Sutter and Derrick Pouliot to the Canucks prior to the Olympics. I’m hearing more Despres than Pouliot at this point as executives tell me Pouliot continues to be a no starter for the Penguins.
If the Penguins do emerge as a legitimate suitor in the next couple days, keep in mind that Kesler has a no trade clause and some buzz from NHL types I’ve heard from is that they believe Kesler would be lukewarm about the idea of coming to Pittsburgh and being a third line center when he’s a true No. 2 center.
Despite GM Ray Shero lowering expectations during a media session on Wednesday, the Penguins are in on a lot of different scenarios right now. Going to be an interesting next four to five days and expect at least one move by March 5th from them.