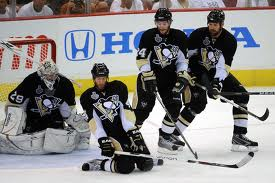 The Pittsburgh Penguins have emerged as a front runner for Rob Scuderi. As I’ve been saying all week, the Penguins have been in on him and there’s been contact between the two sides since early Wednesday morning. Agent Steve Bartlett and Penguins GM Ray Shero are involved in “heavy discussions”, according to a league source. Scuderi has been targeting a return to the Eastern Conference.
Darren Dreger of TSN reports the team is discussing a 3 to 4 year deal around $3 million per. Scuderi made $3.4 million last season.
A Scuderi signing would likely trigger a Matt Niskanen trade.